The Trongone Band - Keys to the House

Rapidly gaining momentum with a sound that falls perfectly between southern Rock ‘n’ Soul and Americana Jam, The Trongone Band is turning heads and making an impact on music scene. Formed as a family by brothers Andrew and Johnny, The Trongone Band enlisted much sought-after keyboardist Ben "Wolfe" White and award-winning bassist Todd Herrington to solidify their touring lineup. Herrington adds a crucial dimension of deep pocket groove and funk to the already seasoned unit.

Their debut album “Keys to the House”, produced by Todd Herrington, showcases the individual contributions of each of the musicians in order to create the foundation for what is to come. “It was one thing to develop and write the songs over the past year as we played them out on the road, but it was a completely different world to take them into the studio, put them under the microscope and really turn them into songs” says Johnny Trongone. The band holed up for three days in Montrose Recording using their Flickenger console to provide the warm sounds that turned into Keys in the House. The studio had a old school recording vibe to it, with lots of pillows and blankets around the drums, no bottom heads on the toms, guitar solos through bass amps, and Todd even borrowed Johnny and Andrews dad’s bass for the session. This family affair recording process helped the band grow "so much on a personal and musical level, and listening back and dissecting these tracks helped us learn so much about each other’s playing.”

As a collaborative effort, the band is set to push forward and tour from coast to coast and continue their growth as a band. This four-piece ensemble may not all be related, but with a chemistry so emphatically discernible, it's fair to call them brothers.

"The group blends the contemporary jam freak-outs of My Morning Jacket (the comparison is made even more appropriate by guitarist Andrew Trongone's mane like Jim James's) with the Muscle Shoals-inspired Leslie speakers and The Band's narrative storytelling." - Paste Magazine

"The resulting music is influenced by the likes of The Black Crowes, Hard Working Americans and Drive-By Truckers." Jambase

"The Trongone Band conjures up imagery of boxcar drifters, rolling hills and dirt roads that are easy to close your eyes and get lost in." MusicFestNews

"A boogie-woogie shot of whiskey delivered with a deep taste of southern-rock soul." An Honest Tune 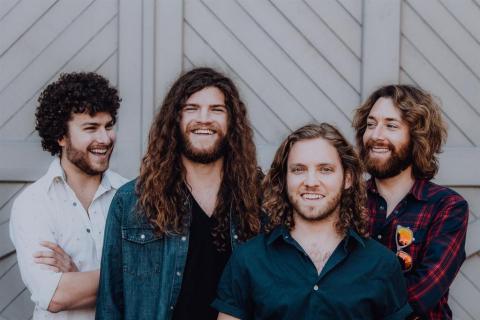