From 2000-2011 the prog/world/jam/jazz group Garaj Mahal toured heavily throughout North America. They built a significant fan base and headlined major events like FloydFest, High Sierra, and Smilefest. They released four critically acclaimed studio albums and even more live albums. Here we have their music reinvented, big band style along with founding member Fareed Haque!

"Time and time again I am struck by the power and lasting quality of the music of Garaj Mahal. Hippies, jazz heads and even professors can get with this amalgam of hip, funk, world music. Garaj Mahal: hip, educated, and worldly while being raw, honest and in the moment.

When Cincinnati Conservatory of Music Jazz Director, Scott Belck, approached me at a gig about a Garaj Mahal big band album I thought he was joking at first. Then I realized this cat knew all our tunes! He seriously wanted to play our music arranged and performed by his orchestra!! Then debut it at Lincoln Center, play it all over the country, record an album. And here it is.

So check this one out. The CCM Jazz Orchestra arranged and played this music with me and we had a blast performing it and recording it. By the way, This record is meant to be played loud. Crank it up and enjoy!" - Fareed Haque

Legendary jazz guitarist Pat Martino says "Fareed Haque has been in the forefront of our instruments evolution for quite some time, and these recent recordings bring us up to date with an impact that’s memorable. Bravo Fareed!" 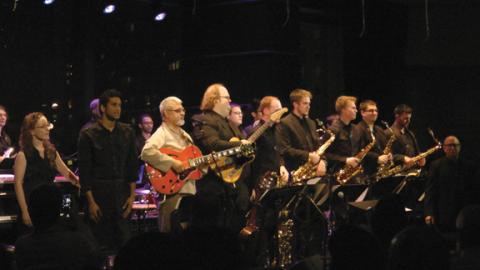