This thundering ensemble is escorting Afrobeat music into the modern age and captivating audiences nationwide. Tri-lingual lyrics, an airtight rhythm section, powerful horns and the authenticity and sheer relentless energy of frontman Kevin Meyame combine to make the Afromotive one of the premier world-beat bands of the modern era.

Originally from Cote D'Ivoire, West Africa, Kevin entrances the crowds with his polyrhythmic djembe skills and sings in French, English, and his native language of Baoule. The combination of Kevin's cultural and musical heritage alongside the jazz and classically trained musicians of the Afromotive has created a mesmerizing sound that transcends musical and ethnic boundaries.

The driving pulse of "Yako," the afro-pop showmanship of "Lies" and infectious nu-beat grooves of "Scare Tactics" and "One Way Go" exemplify The Afromotive’s steady ascent in the ranks of World-beat and Afropop music. This band’s talent and potential has not gone unnoticed in the industry as is made evident by on-stage collaborations with such prominent luminaries as Erykah Badu and Fela Kuti’s own guitarist Kalakuta Moziak. Scare Tactics is the end product of a finely tuned afrobeat machine called the Afromotive that captivates and entertains. 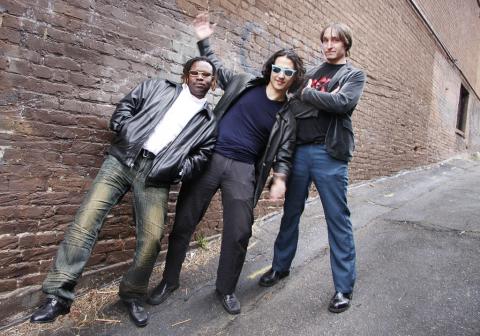