Lotus explores the intertwining worlds of live electronica and rock on their new album The Strength Of Weak Ties.

“Refined and highly melodic blend of electronic blips and beats that are seamlessly orchestrated with jazz, funk, breakbeats, and a pastiche of organic global sounds.” - BIG SHOT MAGAZINE

Lotus’ third release combines the rock edge of live guitars and percussion with the synthetic bleeps and crushing beats of dance music — and it works to a stunning effect. In a live setting, Lotus plays every note; nothing is ever prerecorded. The improvisational nature of the live show leads to a spontaneity and excitement that just can’t be achieved by “pushing play.”

Lotus — Steve Clemens, Jesse Miller, Luke Miller, Chuck Morris and Mike Rempel — formed in 1999. Through non-stop touring, Lotus’ astonishing instrumental tracks quickly garnered a huge and loyal fan base. Fans started following the act across the country and traded tapes like they were baseball cards. This lead to Lotus's 2002 debut album, Vibes, recorded live in concert during the Fall of 2001. The first pressing sold out in February of 2003.

“Musically, we wanted this album to contrast raw and dirty sounds like guitar feedback, roomy sounding drums, with obviously electronic sounds like drum machines, and analog synths,” says Luke Miller. “We worked to give it a loose yet tight feel, to have the details of a headphone trip, but still rock out.”
1- Tip Of The Tongue
2- Kesey Seed
3- Bubonic Tonic
4- When H Binds To O
5- Long Legged Stumble
6- Drunken Giraffe
7- Epidemic
8- Blue Giant
9- Cirrus
10- Sprout To Vine 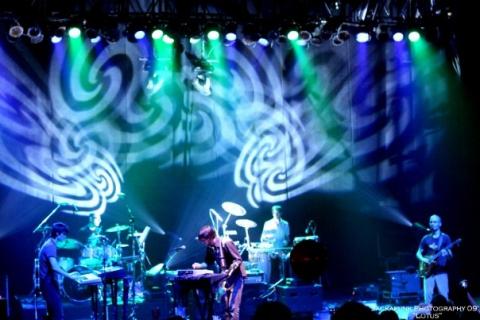