Arriving at Al's Wine & Whiskey, I saw Jeff loitering out front. After a short conversation I joined him and headed into the bar. The venue leaned towards the higher end of the spectrum, offering a whole wall of liqueur behind the bar. I acquired my white russian and found a seat on one of the leather couches in front of the small stage. As Jeff began an older woman danced her way over until she was right in front, staring Jeff down as she moved. This lead me to the conclusion that Bujak can get ladies of all ages moving.

Buj played in the front of the venue, his beats and bass shaking the venue as his lights tore through the fairly crowded lounge. The vibe was interesting, almost upscale; for what I had seen in Syracuse. Jeff's music was very cohesive and flowing. The actual sound was smooth in it's composition, yet edgy in regards to it's tones and effects. What Bujak does as one man, is more than most bands do collectively. With his eyes often closed; his hands and feet floated effortlessly between knobs and pedals. With his lights at full force Bujak began to destroy the keys...

Looking around the establishment I saw people smiling, moving, dancing and overall paying attention, focusing on what Jeff was doing. Which for a Sunday night in Syracuse isn't an easy feat. His playing truly was stellar. Add the top notch craftsmanship of the effects and you have a truly innovative player, working his way up the musical ladder.

The cold waft of air, more often than not, meant more folks coming into the bar. Al's had mystique and character, proving to be an interesting, yet more than satisfactory environment for Jeff to set the scene. As I stepped outside for a breath of cold air, myself; I could hear Jeff's music being played live through speakers on the front of the venue. It was interesting wandering over to my car, in what appeared to be a ghost town, with Jeff's music playing in the background.

When I re-entered Al's the disco ball was illuminated; to the delight of many, now wide-eyed patrons. Bujak weaving in and out of destruction... I couldn't help but dance. Several times during the set folks would approach Jeff for a better look, in an attempt to ascertain what he was doing.

At the set break I approached a gentleman who was standing off to the side. I asked "Have you seen Jeff play before?" He responded with "Yes, many times. He's my son. I've been seeing him play since he was really young." He talked about his support of Jeff's playing from the beginning and Jeff's consistent passion for playing the piano. We also talked about the importance of supporting children in what it is he or she is passionate about. I asked if he knew early on that music was what Jeff was going to do, and he said confidently "Yes."

I reflected for a second on how proud he must be watching Jeff as fan's approached him to give praise. I mentioned that he must be proud to know Jeff is playing for people who really enjoy what he does. He mentioned that as a parent, it made him feel good. For the rest of the evening, his pride in Jeff was apparent. Jeff wandered over and mentioned how it had gotten a little rowdy on the night of one of his previous shows, so the bar was concerned about sound levels. I found the sound to be about perfect, though it was entertaining to see Jeff's burning desire to tear the place down.

A half hour later the second set began. With a similar approach to his first set, Buj carved away at the keys while the beats crunched on behind him. I thought Jeff found a heavy yet respectable level for the sound. As Jeff reached the end of one of his songs he was approached by a gentleman seeking info and a CD. He shook Jeff's hand and stated "You are way talented."

As the set progressed it felt looser than the first set. Going between trance, almost jamtronica, to free form jazz, back to the crunchy beats. All the while his fingers tearing into the keys; chop, chop, chop... There were a few points where Jeff's classical training came to the forefront. With a beat behind it, he offered up some danceable grooves.

Towards the end of the set Buj toyed with some Snoop Dogg and Dre adding some complex rhythms and progressions to the simple yet legendary music. With another song or two before closing the set I could see Jeff was getting tired. The set concluded to a sizable amount of applause followed by pleas for one more song. As Jeff unplugged and exited the stage, he was surrounded by fans, both old and new.

"I met you in Connecticut..." stated one fan. "I'm so happy you got added to Camp Bisco!" said another. Jeff offering up free CDs as he had some available for purchase. "Holy fuck." exclaimed a first-timer. "Are you shitting me? That was sick!" As a young lady spoke with Jeff about the first time that she saw him at a house party, I notice Jeff clutching his chin. Something I later found out was a way of showing off the ring. Jeff, played well to the crowd, making each fan feel appreciated.

In total, Jeff played three and a half hours of music... Free to the public. With Jeff's dad smiling on the two am crowd begins to dissipate...

Almost everything about Bujak's shows hint at something bigger than what currently is... It foreshadows a time on the horizon when Jeff will be elevated to that next level. Witness the progression as it's happening; See Jeff Bujak. 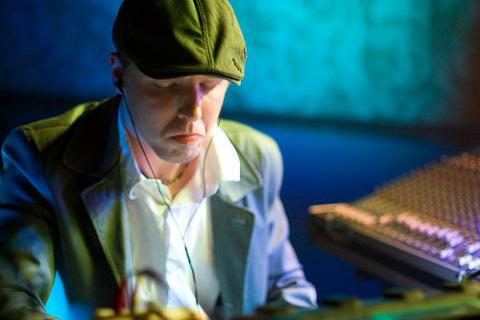